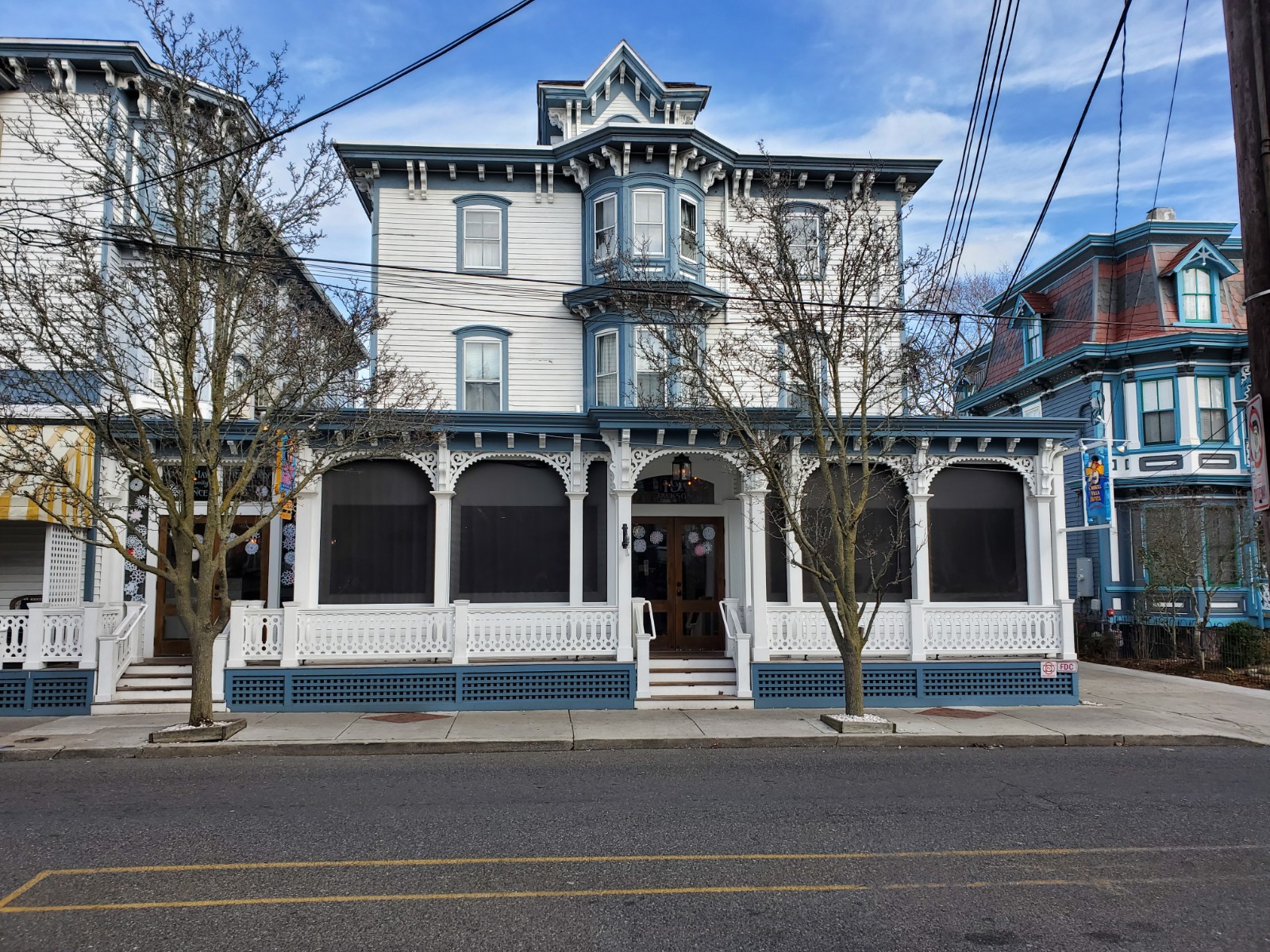 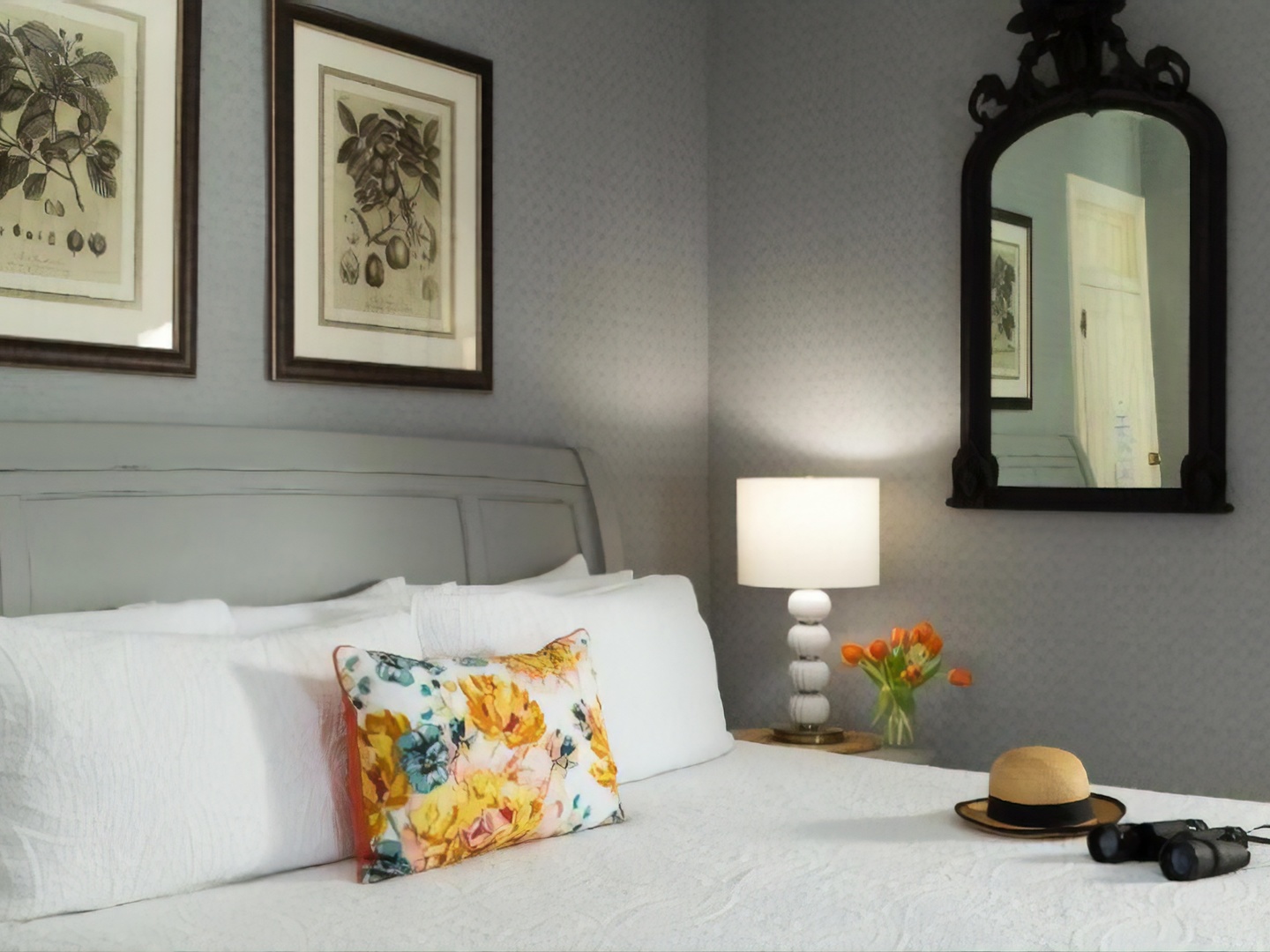 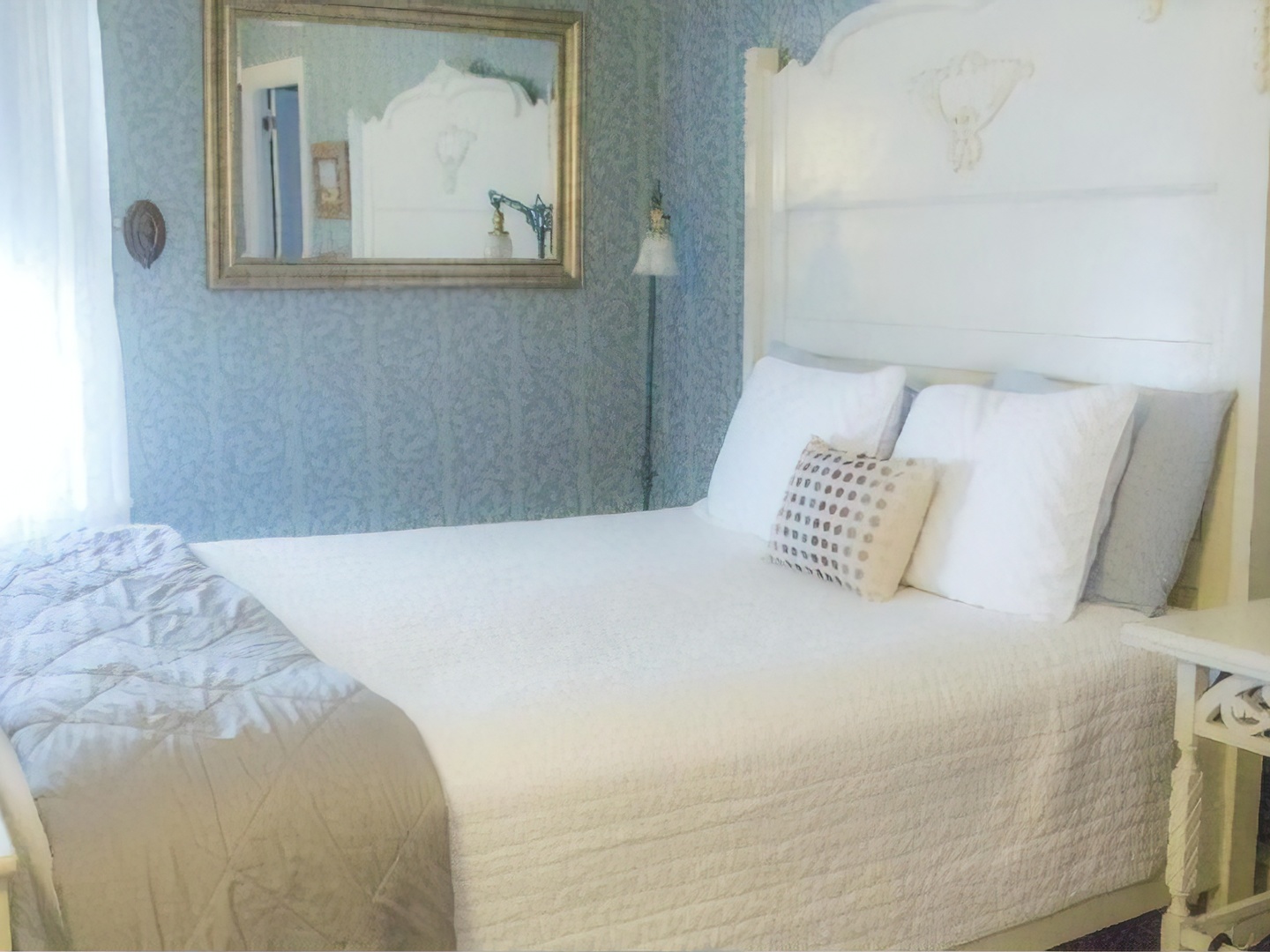 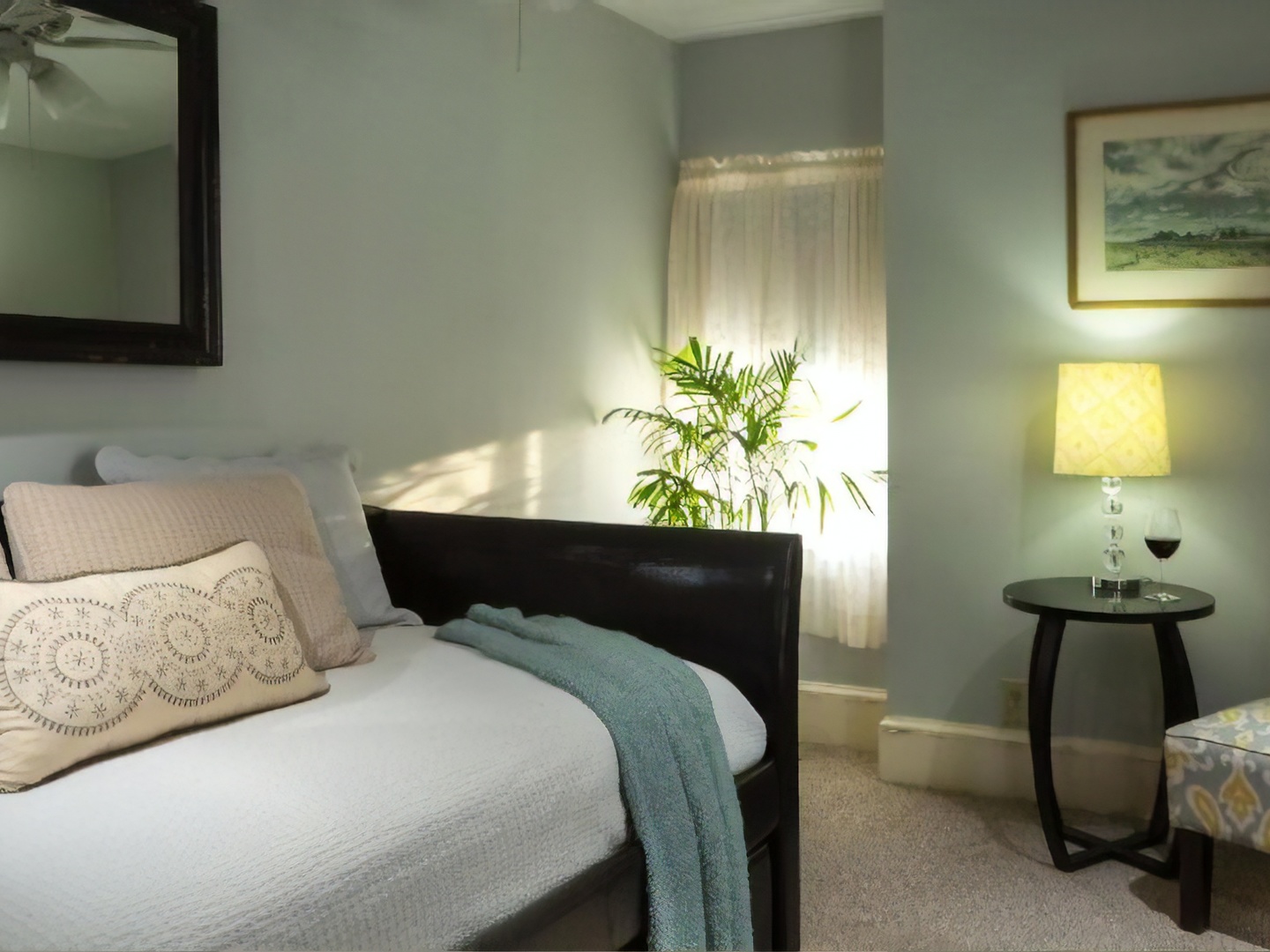 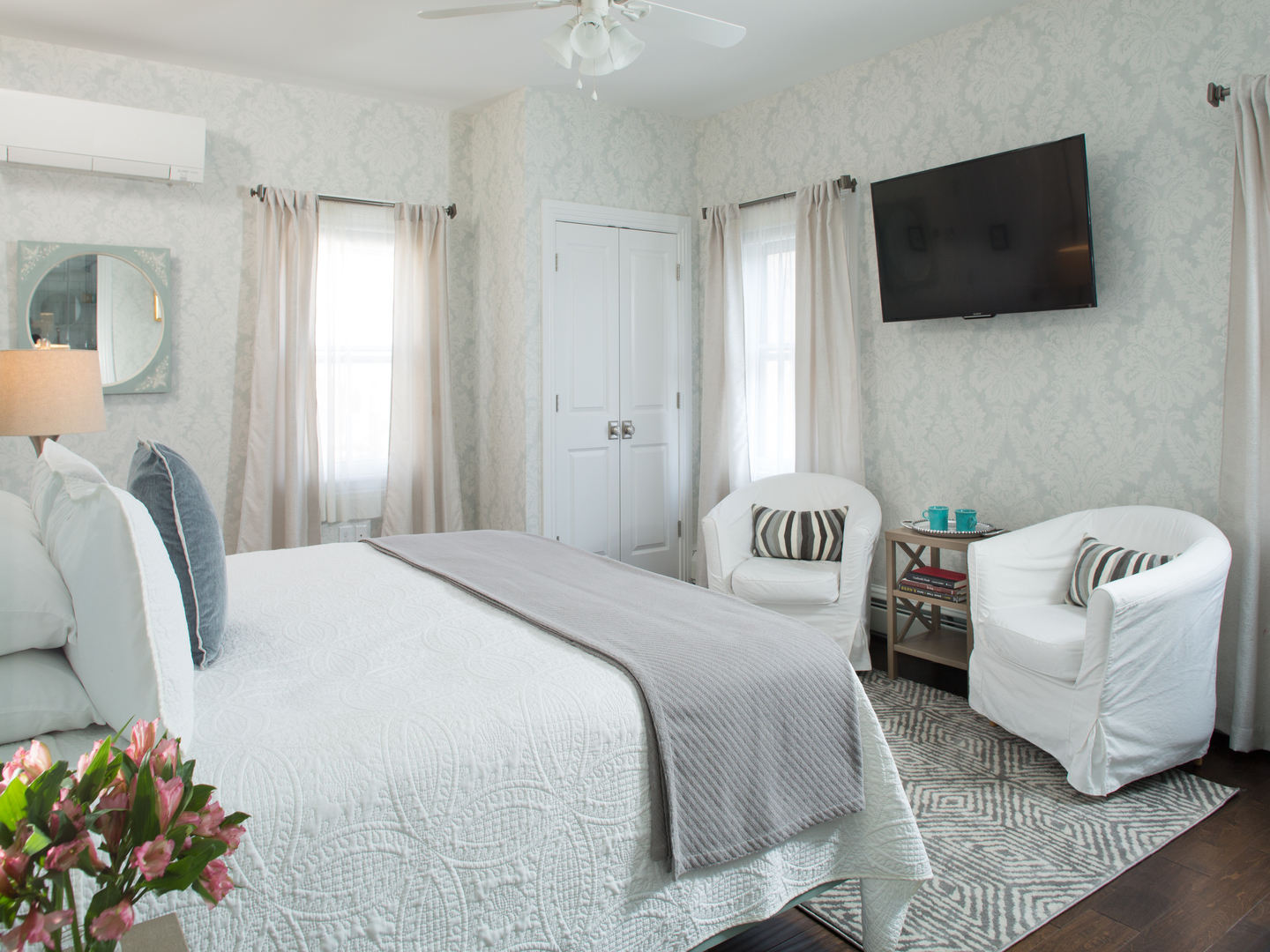 The Carroll Villa Hotel offers guests a wonderful combination of a grand, historic building with an unpretentious and creative atmosphere. All the wonders and charm of seaside Cape May plus memorable accommodations and dining combine to insure your stay is comfortable and memorable. The guest rooms all feature a unique style and charm, and offer modern amenities including flat screen TV’s, telephones, air conditioning, free internet access and private baths. A full Mad Batter breakfast is included along with towels for the beach. The Blue Batter Bar also offers a daily happy hour and live music. 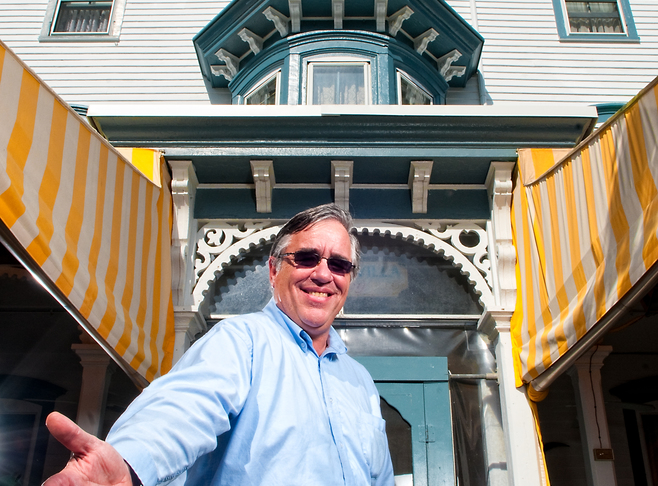 The urban legend is that Harry Kulkowitz won The Carroll Villa in a poker game. Well, he was playing cards with the owner, probably poker, and he most likely won, but the reality is – he fell in love. Where others saw what might best be described as a “fixer upper,” Harry was a dreamer and saw a gathering place for those who loved good food, beautiful art and beautiful surroundings. The price tag was $96,000. Although he owned the prestigious Kenmore Art Gallery in Philadelphia, Harry did not have the money to buy the Cape May, NJ hotel, but a man he met in Cape May, Henry Gorelick, who happened to take a shine to him, put in a good word with the bank and in 1976 he became an innkeeper and restaurateur.

Mad Batter Live Music and Events. He named his restaurant The Mad Batter. At the time, Cape May had few good restaurants and no gourmet dining to speak of, but Harry had a knack for spotting talent and in no time, The Mad Batter was garnering a reputation for fine food. After a favorable review by nationally acclaimed food critic Jim Quinn, which appeared in the Philadelphia Inquirer on a Friday, The Mad Batter was discovered. Thus, began the start of the Cape May restaurant scene.

While Harry was launching his Cape May hotel and restaurant, his son Mark was in the Army doing a three-year stint in Europe. His father kept writing to him telling him about what a great place he had in a town Mark had never heard of – Cape May. He kept asking him to come help him run it, but Mark had other plans. He describes himself as a “New York Jew who got traded to Philadelphia [where the family moved] who hated it and moved back to Woodstock, New York. I’m a counter-culture hippy, anti-intellectual-intellectual” who decided to see what this town of Cape May was all about after his discharge from the Army in October 1978. “I went to Frankfort,” says Mark, “where I was discharged. I threw my uniform in the trash. Put Civilian clothes on and got on a train to the Kaiserstuhl. The next day I was picking grapes. I returned to the United States in January 1979.”

He headed down to Cape May, met a woman by the name of Pam Huber, who was working for his father until Harry fired her – again. “I had this Russian hat on,” he recalls, “from Bullwinkle and Rocky. My sister introduced us. She said, ‘This is Harry’s son.’ Pam said, ‘I didn’t know he had a son.’ And against her better judgment, we started dating and we got married.”

Carroll Villa Boutique Hotel Harry fired Pam and Mark (always separately) several more times over the years but, he maintained, “Had to hire them back” because he “needed the help.” Amidst the family dramas, Pam and Mark have managed the Carroll Villa Hotel and Mad Batter Restaurant for over 30 years and had three children in the process, who also grew up with the family business. Pam’s artistic sensibilities are reflected throughout the property. Her mosaic tile artistry can be seen in the newly refurbished bar and she manages the art gallery, which regularly hosts the best photography and art in the county. “She is the heart and soul of the place,” says Mark of his wife of 29 years.

And now the third generation is posed to step in. Marta, Kyle and Tess – three Huberwitzes (as Mark and Pam refer to them) are now taking an active part in the business. Kyle runs the bar. Marta, along with her mother, has updated the guest rooms to be more contemporary, moving away from the Victorian sensibilities which characterized the property over the decades. And Tess is there to help in the summer months when she is not in college.

Summarizing what he likes best about running both a Cape May, NJ hotel and restaurant for 30-plus years, Marks says simply, “I’m a Kosher ham. We tried to provide a very warm atmosphere here. And that’s the thing that’s hard to realize, that the staff does a great job. In the Mad Batter, we serve over 75,000 people a year or something like that and everybody needs a “Hello” and a “Thank you.” You lose sight of that sometimes because the summer is so driven. And that was my father’s philosophy of life too. You work hard all your life and you deserve that. You deserve a warm “Hello” when you get here and a “Thank you” when you leave. And that’s my job and I love it.”