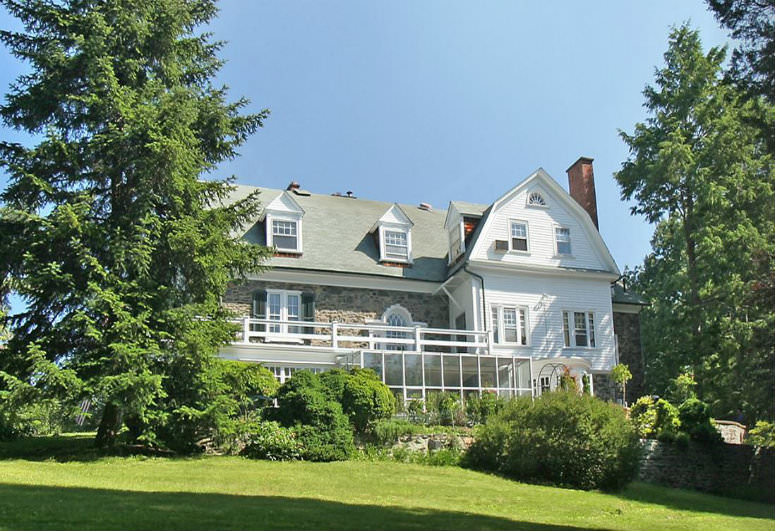 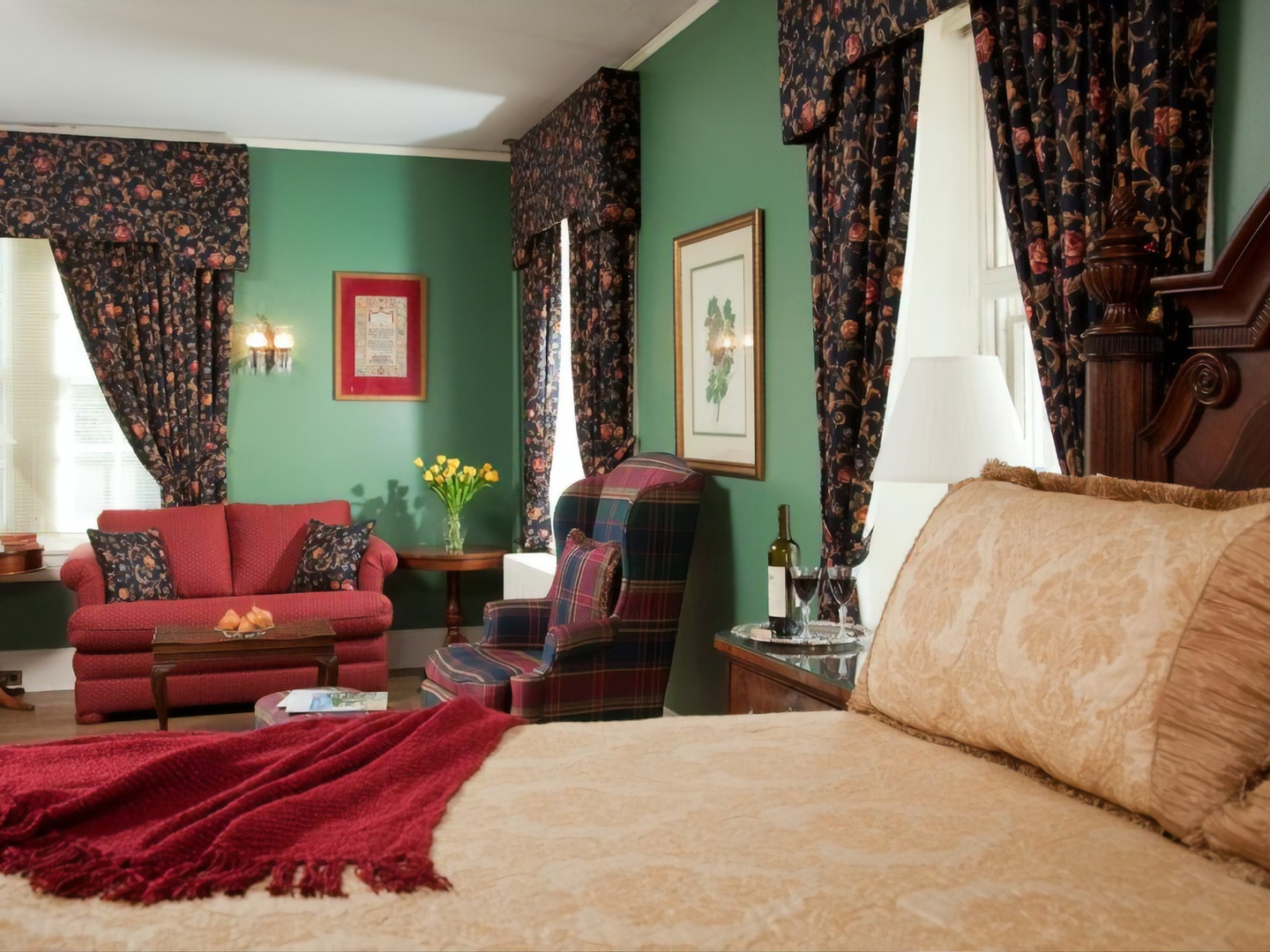 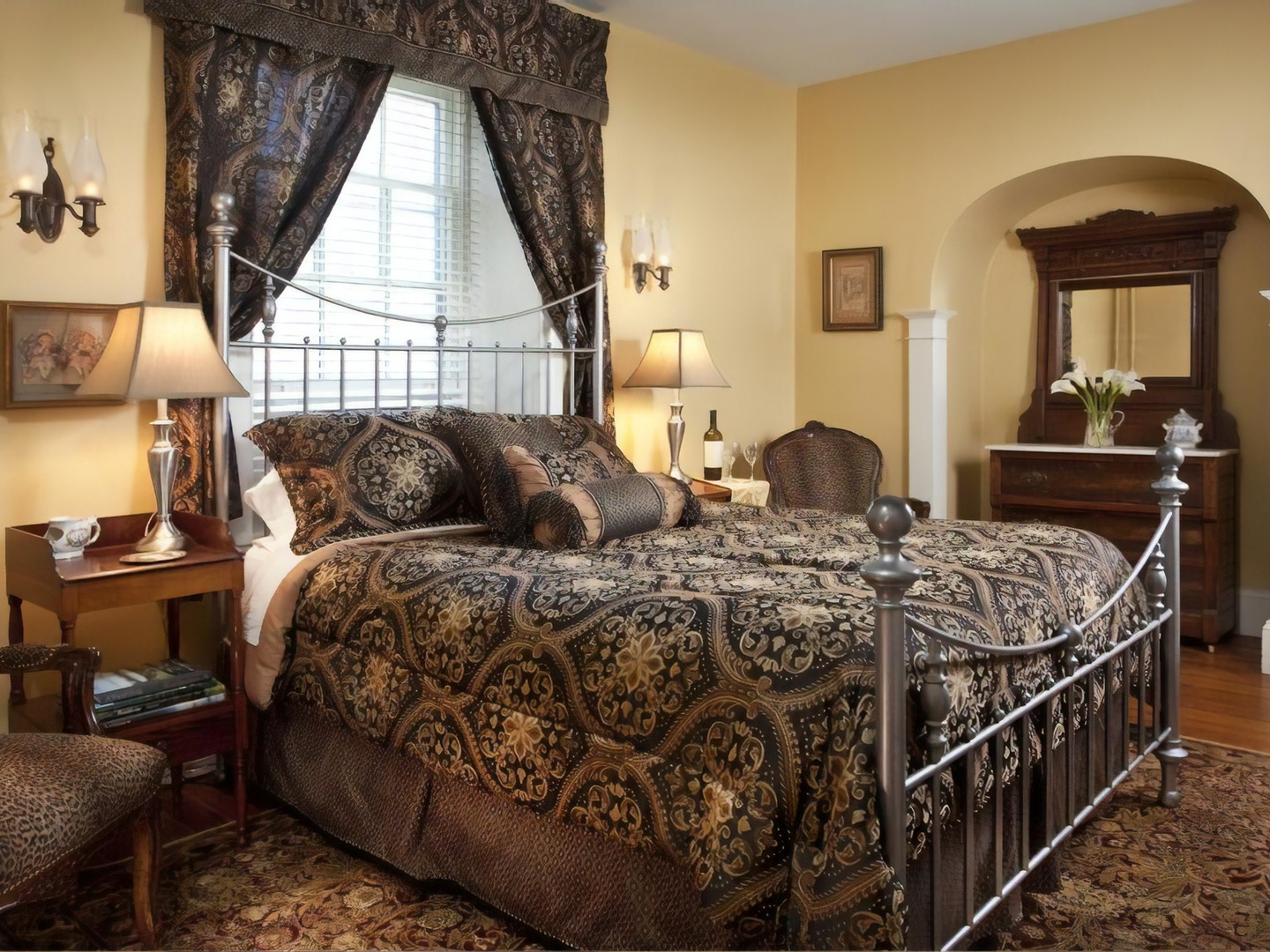 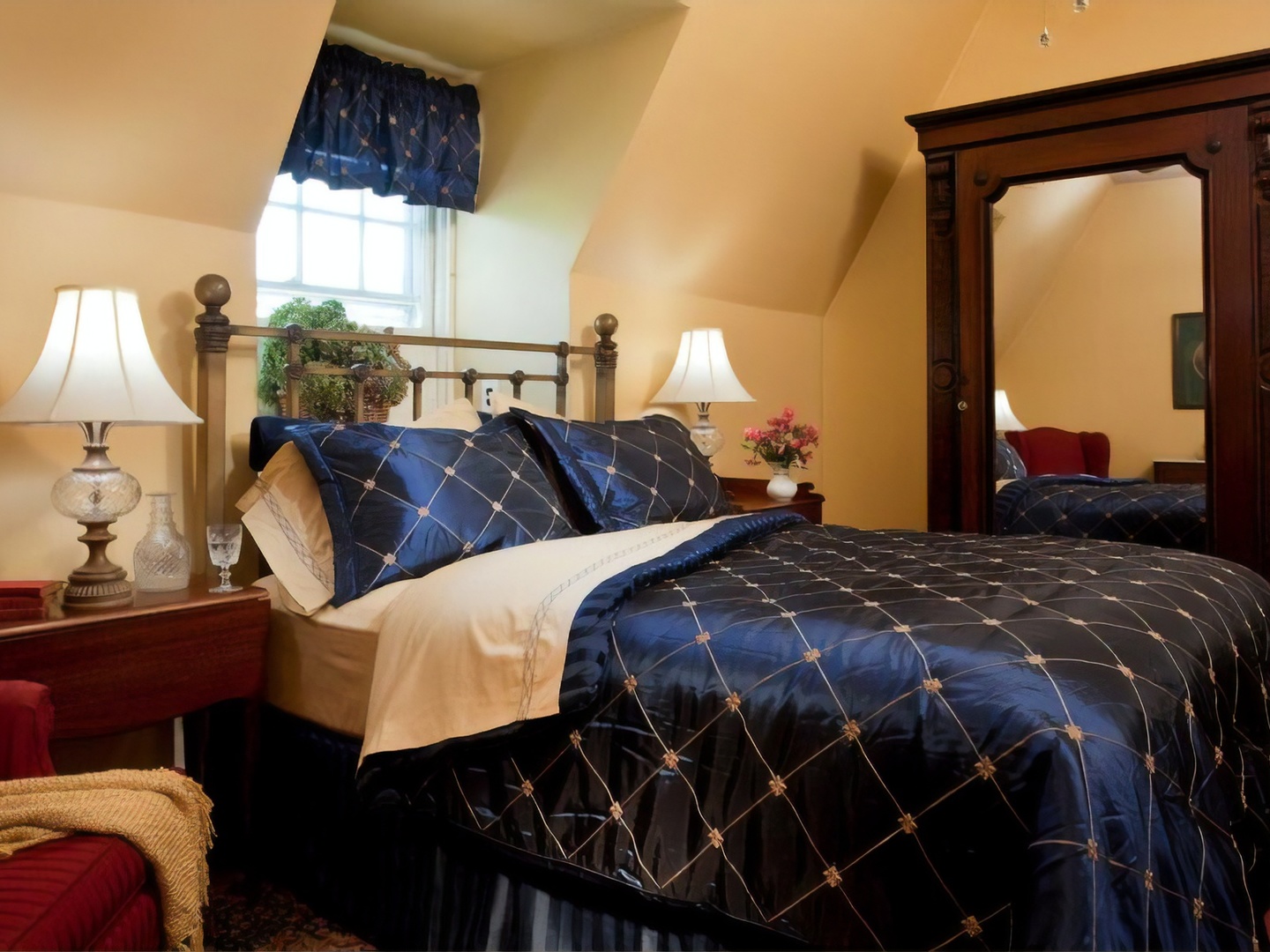 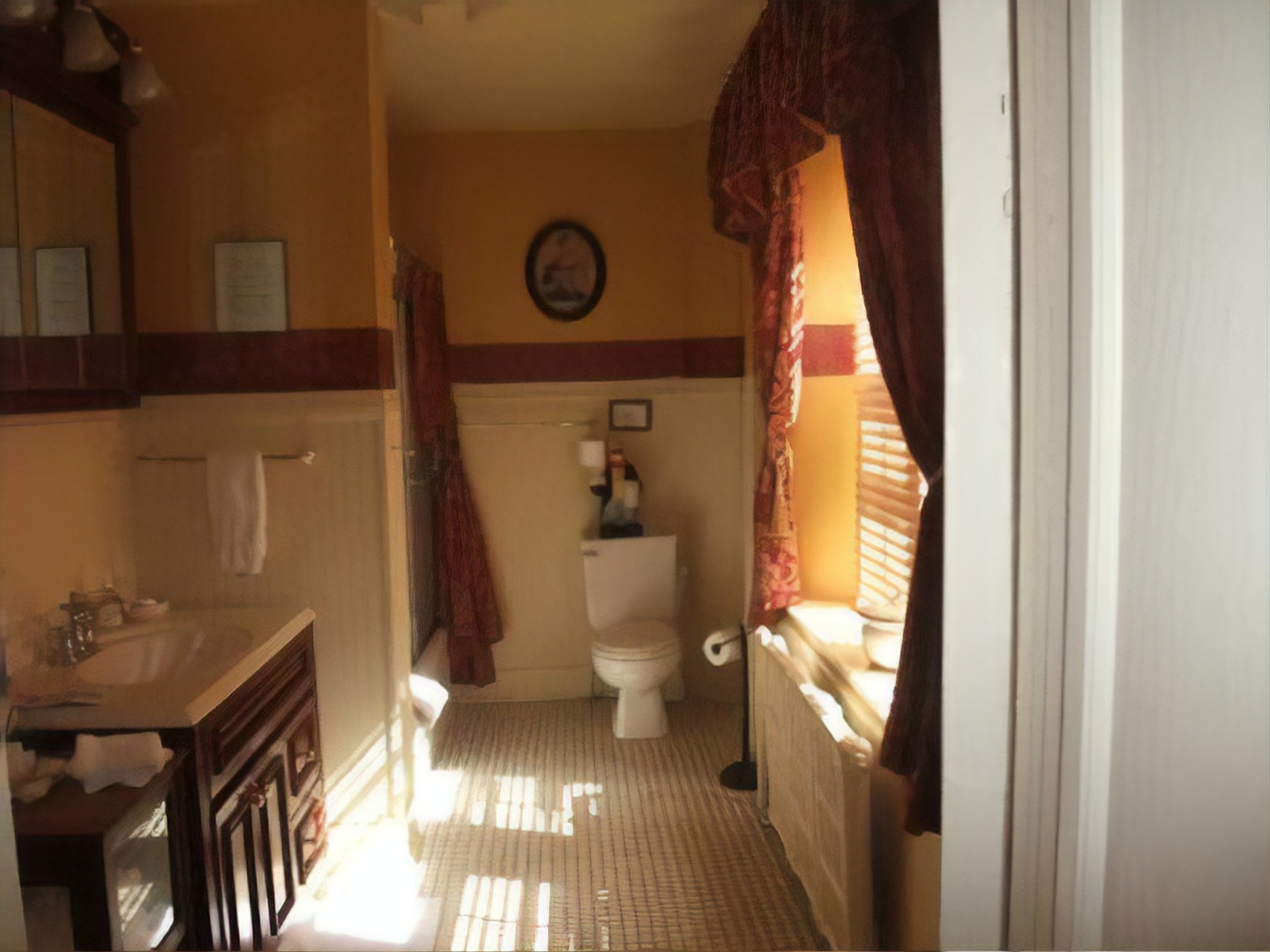 Enjoy country elegance in our luxuriously appointed guest rooms and suites. Rooms include plush bedding and stately decor. For more privacy, guests can stay in one of our two cottages featuring fully-stocked kitchens and washer/dryer, and overlooking the meadows. Each morning enjoy a splendid breakfast served on fine china. We are the only bed and breakfast in the Brandywine Valley which offers hands-on cooking classes taught by professional chefs. We are only minutes from all the Brandywine Valley attractions including Longwood Gardens, the Brandywine River Museum, Winterthur, Nemours, Hagley, and the wineries of the Brandywine Valley Wine Trail. We are not far from downtown Philadelphia and its major universities, and if you like bird watching, we are only 20 minutes from the Heinz National Wildlife Refuge. Also nearby are Ridley Creek State Park, Tyler Arboreum, and Scott Arboreum. 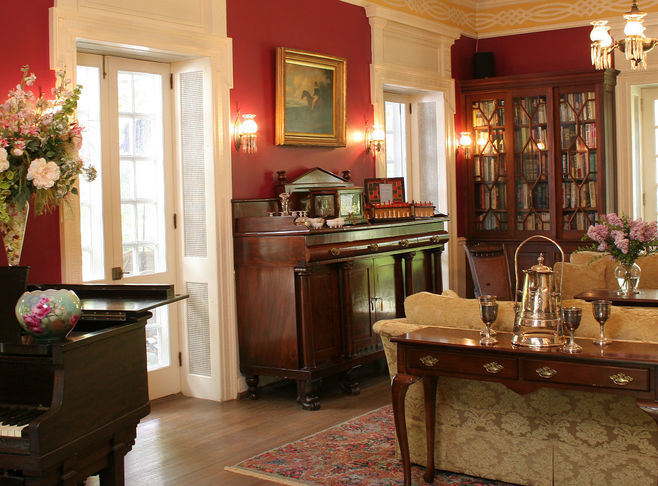 “…located on the top and slope of a fine hill with more than three-fourths of the land covered with a luxuriant growth of noble woods…it was modelled on Downings Northern Farmhouse, built of hard, dark gray stone taken from the land…and he chose the Indian name of a small river by which his forefathers had settled, and he called it ‘HAMANASSETT’.” “Hamanasset” was adapted by Dr. Meigs from the name “Hammonassett” which was the area in Connecticut where his English ancestor Vincent Meigs settled in 1653/4.

The description is still accurate today.

“Dr.Charles Delucena Meigs was Professor of Obstetrics and Diseases of Women and Children at Jefferson Medical College in Philadelphia. In 1856, at the age of 64, Meigs purchased a tract of land in Delaware County about twelve miles from Philadelphia. Here he read his books, tended his flowers and studied vegetable physiology. He presided over a family dinner on Sunday, June 20, 1869. On June 22, 1869, when all nature was redolent with life and the air laden with the fragrance of the rose and the honeysuckle, this great and good man was found dead in his bed, having apparently died without a struggle at the age of seventy-seven years.” – Doctors Made In America by Edward Louis Bauer, M.D.

After his death, the property passed to his eldest son, General Montgomery Meigs, who had been Quartermaster General to President Lincoln during the War Between the States. Soon thereafter, Michael J. Dohan purchased the property. The Dohan family lived at Hamanassett for 130 years until Glenn and Ashley purchased it in 2001.It was Michael Dohan’s son, Joseph, who, between 1899 and 1925, renovated the six-room Downings Farmhouse into the present day Federalist mansion, keeping its same name. Charles Barton Keen was the prominent architect who remodeled the house. Keen had designed many residences in the Germantown and Overbrook sections of Philadelphia and many mansions for wealthy patrons on the Main Line as well as houses on Long Island. He later designed the Aronomink Golf Clubhouse. His best known project is Reynolda, the Winston-Salem, North Carolina estate built for the R.J. Reynolds family which is now a museum of American Art.

Hamanassett has always been renowned for its hospitality and gracious elegance. At the turn of the century, it was headquarters for the Lima Hunt, a world-recognized private fox hunting organization. People came from far and wide, but mostly from England, to have a week or two of fox hunting.

Hamanasset was made into a year-round home for the Dohans about 1900. Up until then, it had been only a summer retreat from Philadelphia’s heat. It is difficult to imagine how it must have been: no heat except fireplaces; no electricity (some of the original gas-jet lighting fixtures are extant); no plumbing; water hauled from a springhouse. Still, Hamanassett, at the turn of the 20th century and for some years thereafter, was known as one of the great private showpieces of the Valley.

In 1933, Joseph Dohan died, and his widow, world-recognized archeologist Dr. Edith Dohan, had to sell approximately 300 acres to settle tax claims. The halcyon days of fox hunting ended. Before her marriage to Joseph Dohan, Dr. Dohan was Dr. Edith Hall, one of only two women in the field when the Minoan Culture was excavated and the palace of Minos in Gurnia, Crete was discovered. After Joseph Dohan’s death, Dr. Dohan returned to her career (and her maiden name/title) and became Curator of the Classics at the University of Pennsylvania Museum. She died there in 1943.

Joseph and Edith’s son, David next became owner of Hamanassett. He and his wife, Evelene, ran the estate. Evelene established Hamanassett as a Bed & Breakfast in 1984 and it has enjoyed increasing popularity since that time. In 2001, Glenn and Ashley Mon purchased Hamanassett, reestablishing themselves as innkeepers. Prior to moving to Pennsylvania, Glenn managed the Super Dome in New Orleans and Ashley owned a Bed & Breakfast. The owners may have changed, but the warmth and gracious hospitality for which Hamanassett has been known since the mid-nineteenth century has not changed, which makes the current hosts quite satisfied.